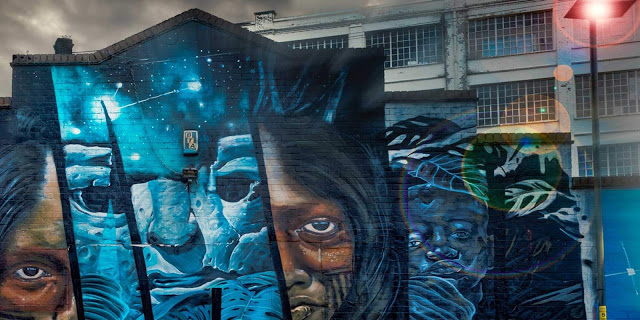 The Custard factory is a sprawling warehouse complex that today is filled with trendy bars cafes restaurants and shops in the Digbeth area of the city. You will know when you are there as there's a large chimney with a tie around the top. It's also home to the Medicine Bar which has been there since the building was redeveloped in the early 90s and synonymous with the rave scene of that time. It also incorporates the Mocking Bird Cinema which is a wonderful intimate venue that shows a mixture of contemporary and classic movies.

A lot of the architectural features were maintained during the renovation and even though the place is surrounded by huge railway arches the place still has a nice airy feel with high ceilings, beautiful windows and a open courtyard where you can stop for a bite to eat or drink. It's become a bit of a hub for creative industries and there are some interesting art examples to be seen as you wander around...

It could be classed as Birmingham's Art District and is a short walk from the Bull Ring city centre. The name comes because it was the site of the old Birds Custard Factory built by Sir Alfred Frederick Bird in 1906. There are many fine examples of architecture dating from the 19th and 20th century along with the medieval dotted around Digbeth and it was designated a conservation area in 2000.

The venues central location makes it really easy to access with the Birmingham Coach Station being nearby. One of Birmingham's oldest buildings The Old Crown Pub and Bulls Head sits opposite with parts of the building dating from 1368. There's a plethora of different things happening at the custard factory with a gin festival and a peaky blinders festival to name but a few.
There's also an event which happens regularly called The Digbeth Dinning Club Located on Lower Trinity Street next door to The Custard Factory, which hosts many artisan street food stalls cooking delicious grub. Its great to have such a wide selection of food and many of the vendors have gone on to win awards which makes this such a great user experience.

There's also plenty of parking to the rear of the building in a novel area surrounded by scrap cars which have been crushed into cubes and some quite extraordinary street art adorning the walls. 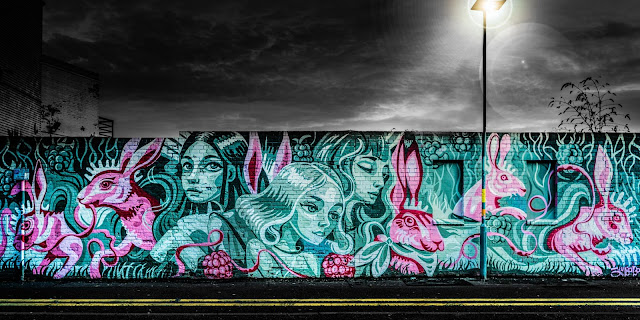 In fact there's probably the best collection of street art to be found in Birmingham with the whole area being used as a canvas for expression. Much of Birmingham's old warehouse districts have now been transformed as is the case here with new life being breathed into old.
Labels: Visit Birmingham
England, UK Gibb St, Deritend, Birmingham B9 4AA, UK