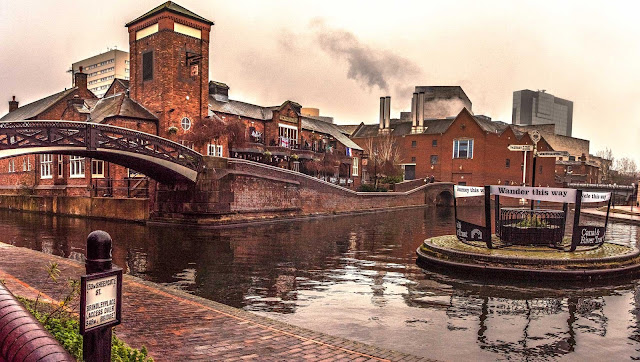 The canals are the key to Birmingham's past industrial prowess and have played a very important role in the modern cities success today.

Huge amounts of cargoes were navigated through these watery veins like coal from the black country which helped keep the Birmingham furnaces alight during this heavily industrialised time. Gas Street Basin is a must see if you are coming to visit Birmingham.

As the name suggests it was the first place in Birmingham to benefit from Gas Lighting. A lot of the architecture from this time period still exists here and it makes for great photographs transporting you back in time.

As you walk down the bustling  towpaths you can imagine what it was like during the industrial revolution when it was a thriving port in the heart of the city. During the second world war it remained largely unscathed and so exist some wonderful examples of Victorian cottages. It's a great area to explore the old Birmingham by way of the canals.

Brindley Place is close by named after the industrial canal engineer James Brindley and there are some marvellous intricate iron bridges that criss-cross from side to side so you get to see everything, the modern and old from all angles. The most prominent bridge you will see is actually a modern day replica and not an original. It followed the original design from the local ironworks so stays true to the era.

The areas skyline is also dominated by the The International Convention Centre (ICC) and Symphony Hall with walkways leading down to the canals so they are easily accessible. You can also walk through the ICC in office hours through the central mall where there are a few coffee stands and galleries. It will eventually lead to Centenary Square. The design of the building was by The Percy Thomas Partnership with Renton Howard Wood Levin and was opened by the Queen in 1991.

It was built on the former site of Bingley Hall which was a huge exhibition centre originally built in 1850. In the late 70s and early 80s the area became a hotspot for people to gather after a night out with cafes near bus stops it was the in place to go if you were on your way home.

Today the area has been modernised, industrial heritage juxtapose clubs, bars and live music venues along with the pretty coloured narrowboats that are moored on this once busy waterway. There is a visitor information centre nearby with a great café next door or you can sit outside many of the bars and cafes that are dotted along the canal side.

If your on a bike its also a great place to visit with its miles of flat towpaths, its also a really fun way to get about Birmingham with the canals being a lot quieter than the roads they are fast becoming a preferred method of getting about town.

Next up read about: Birmingham Botanical Gardens

Click here to find your way to the main home page!